I learned at a very early age that cold breakfast cereal is a shitty way to start the day. I owe this early life lesson to my father who, throughout most of my childhood, would rise at an ungodly hour to make sure we were properly carbo-loaded before school. (This, of course, wasn’t his only morning activity. He would also pack our lunches, get us up and dressed, do my hair, take us to school–the whole deal.) My dad passed down his love of all things breakfast with the usual things like eggs, pancakes, waffles, and french toast, but he was always branching out. So we also had coffee cakes, stuffed french toast, crepes, etc. In tribute, I think, to Bill Cosby and his sketch on letting his kids have  brownies (or was it cookies?) for breakfast, leftover pie and cake were also always fair game in the morning.

Around the time I was 11 or 12, my dad went through a substantial muffin kick. I don’t remember my dad ever making muffins before this, which may very well have been related to an aversion to anything involving a muffin tin. As a kid, I knew that my dad would bake just about anything from cookies to bread, except cupcakes. Because cupcakes, what with all the cupcake liners and batter pouring and increased number of surfaces to frost, were just a pain in the ass. My father is not the kind who has much (or any) patience with the finicky things in life. But at some point, he tried his hands at muffins and almost instantly, the muffin production kicked into high gear. Dad’s muffins came in two varieties: apple and chocolate chocolate chip. (When it was on hand, I’m pretty sure the chocolate muffins were also modified to include marbled layers of cream cheese. I salivate at the memory.) While the chocolate muffins were naturally my favorite, both kinds were terrific and only improved each time he made them. But these muffins didn’t really become a signature “Dad” food until he acquired a set of muffin tins that made gigantic heart-shaped muffins that screamed, “I love you so much I think you deserve a muffin the size of your face.”

It was definitely my dad’s apple muffins that I had on my mind when I decided to make this apple muffin recipe from the King Arthur flour website. All this sentimental nostalgia (combined with the fact that I actually made these on Father’s Day) seems like it’s probably leading up to exclamations about how these muffins were just like dad used to make, or a story about how I’ve spent the past few mornings eating them dreamily, thinking about the days of yesteryear when someone made my breakfast for me. But I really just found them disappointing.

Ignore the ugliness of the over-browned brown sugar topping.

Don’t get me wrong–it’s a fine muffin recipe and all. The King Arthur site sells these muffins as being extremely moist and as keeping well for days, and it’s all true. It’s even quite possible that I’ve eaten, like, three of these today. But they were just not what I wanted. I followed the recipe as written, expect for substuting yogurt for the buttermilk because I didn’t have buttermilk on hand. Buttermilk would have been a better bet and probably would have given these muffins a more substantial flavor. Since these are made with 50% whole wheat flour, I also expected them to have a more distinct whole wheat flavor but the taste of the whole wheat is essentially drowned by the tablespoon of cinnamon that goes into the batter. I also wish that I would have used a more tart apple. I cut up what we had on hand, which was some kind of mild, sweet apple. The result was apple chunks that have a subtle honey flavor that, while pleasant in its own right, doesn’t stand up well with the strong cinnamon flavor. Oh well. 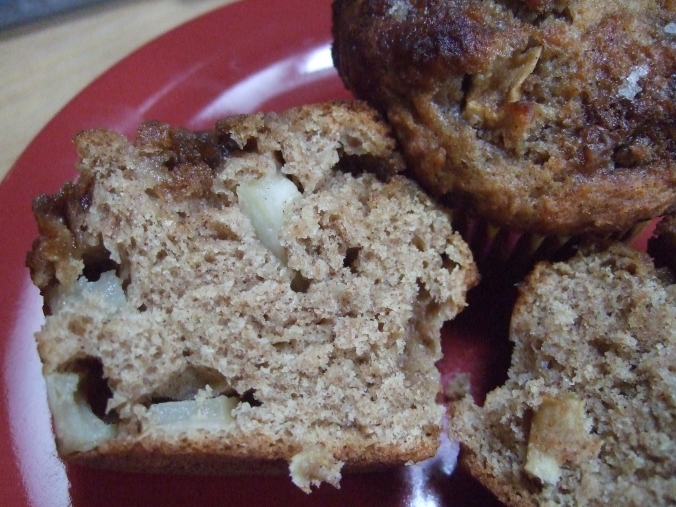 Basically, I think this recipe is like a pair of jeans that looks like crap on me but might look great on you. The texture is great and they’re quick and easy to make. Ultimately, these would be great if you dig a good apple-cinnamon combo or are wary of an overly-sweet muffin. Or if you are the kind of person who feels compelled to bake with whole wheat flour but doesn’t like the taste of it. (Although, really, if you are this kind of person you should just give up the jig and make what you like. Life is too damn short.) I’ll keep eating these muffins, but I’m also not giving them anything other than a shrug of the shoulders.

One thought on “Apple Muffins”