I’m late (mostly due to the fact that my sewing machine died at the end of January), but I finally finished my January project for MAGAM. I made a scoop neck T-shirt using Kwik Sew 3766 and a cotton rayon jersey blend fabric from Girl Charlee. This fabric is pretty drapey and clings like nobody’s business, which is not my favorite. But given that this is my first adult garment besides pajama pants, I’m pretty pleased with the way this project turned out. 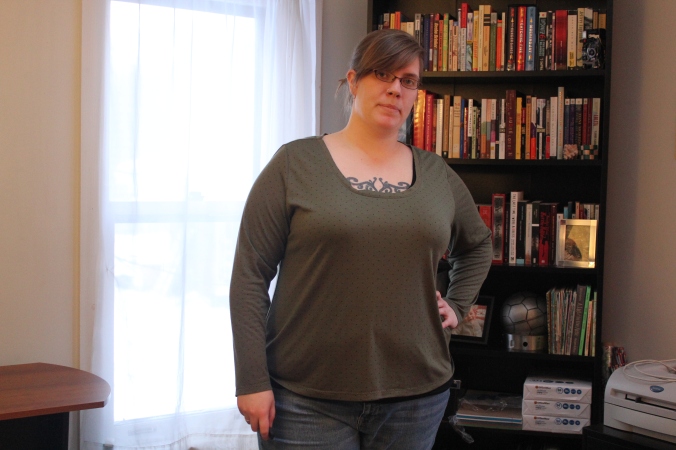 I used the size L for the chest, blending to the XL for the rest of the shirt. I also added a bit more width to the hip, and then did a 3” FBA following this excellent tutorial from VickikateMakes. I’m pretty happy with the way the shirt fits around the bust, but next time around, I’ll eliminate some of the additional width from the hip and the waist.

My biggest struggle and my biggest triumph with this shirt was the neckline. I practiced (and failed) several times attaching a neckband in a way that would lay flat. It got to the point where I was so frustrated that I had to set the whole project aside for a couple of days before I could try again. Ultimately, I realized that I was being too aggressive. I was so worried the band wouldn’t lay flat that I was stretching it so much that it was basically gathering the fabric. Once I realized my major malfunction, life got a little bit better and I was able to sew a reasonably flat neckband. (It’s still a smidge too loose, but good enough for this first shirt.) I made the neckband for this shirt a bit narrower than the pattern piece. The pattern advises you to stitch the ends of the band together and then stretch it evenly around neckband, but I decided to just attach it flat (as shown here in this tutorial), which worked out a lot better than my first miserable stretching attempts.

So I know that I’m on my way to getting a basic T-shirt pattern that fits me well and I know now to use knits that have a bit more body. But I have to confess: this sewing business is hard. And by that, I don’t mean that sewing in and of itself is hard, but rather that going through the growing pains of being new to sewing feels a little rough at the moment. The downside of coming to sewing as a long-time knitter is that I find it really frustrating that the things that I sew don’t turn out as well as the things I knit. And the discerning eye I’ve developed as a knitter that allows to me to recognize and fix issues with my knitting makes it really easy for me to pick out imperfections with my sewing and harder to appreciate where I’ve grown in the process. Like every learning process, I’m finding that sewing has its peaks and its valleys, and feel like I’m in a bit of a valley. I suppose the only way out is to keep sewing. 🙂

And with that in mind, on to my February project!

9 thoughts on “(Not Quite) January Sewing: Long Sleeved T-Shirt”