I have not been particularly inspired to sew this summer. I think I pretty much stopped sewing around mid-May and haven’t done much of anything in my sewing room until this past week. I haven’t done much knitting either. I had a brief burst of knitting activity in June where I managed to finish the body of a sweater. Since then, I’ve knit a single sock. I don’t particularly like summer weather or warm weather clothes, so it’s not a very inspiring season for me. Plus, I’ve kept fairly busy this summer–traveling, entertaining houseguests, finding new places to hike, reading a lot, teaching a summer class.

At the very end of July, I finally got around to cutting out the Ginger Jeans I said I was going to make for the Outfit Along. (Obviously, I didn’t meet the deadline for the actual OAL, but I’ve made progress on both garments and will finish them eventually.) But when everything was cut out and ready to do, I realized that what I really wanted to sew at the moment was something simpler–I wanted a gentler reintroduction to the whole process. So I pulled out Vogue 8909 and sewed myself up an easy pair of lounge pants.

I made View A, which uses ribbed cuffs to finish the pant legs. The fabric is a heavyweight cotton jersey I bought awhile ago from Girl Charlee. I think it was one of the designer exclusive that they have from time to time. It has minimal stretch and feels a lot like the jersey used for something like a Hanes Beefy T. The ribbing is the cotton ribbing they sell at JoAnn’s, which is a little on the heavier side so it works well with a heavier fabric like this jersey. 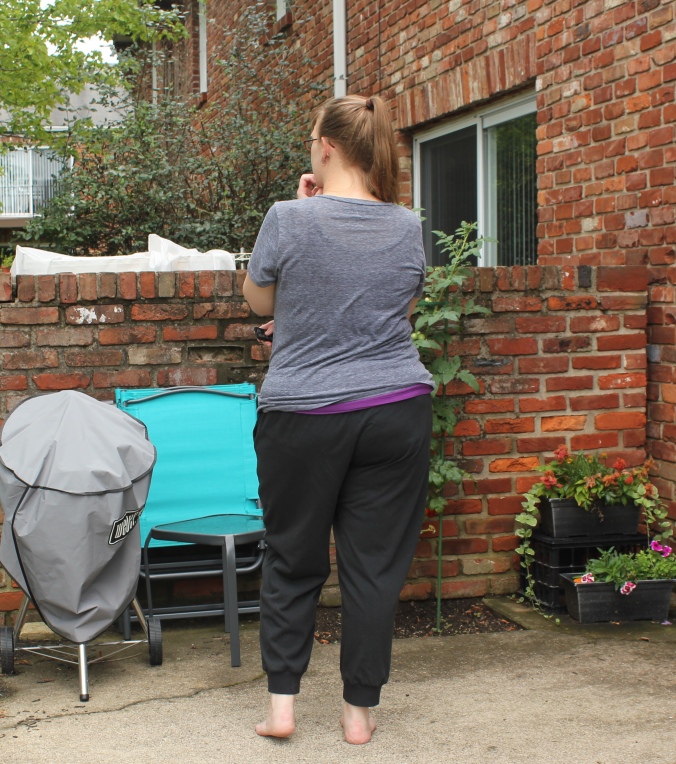 I started with the XL (my current hip measurement is 46″). I did a quick tissue fitting to check the length of the rise and ended up shortening the front rise by 1.5″ before cutting out the pattern. I did a basted fitting after and decided I could use a bit more length in the back, so I let out the yoke seams at the center back–I started sewing on the side of the yoke that meets in the center back using a 1/4″ SA and then gradually tapered back to the recommended 5/8″ SA by the time I reached the side seam.

I was pretty pleased with the fit on these out of the envelope. I experimented with a couple of different crotch curve adjustments during my basted fitting, but none of them got me a better result than sewing that pattern as is. The only problem I had was that once I had completely finished the pants, I realized that the bottom of the legs was too wide and baggy. The cuffs were about 3″ too big and the legs didn’t really look tapered at all–the result was a pair of pants that looked less like joggers and more like a pair of weird sweats that had shrunk to high-water length in the wash.

I ended up unpicking the cuffs (which I sewed on using a lightening stitch and then serged to finish, all in black thread–it took FOREVER to get them off) and recutting them to the measurements for the L. I then tapered the leg to also be the same measurement as the L at the leg opening. I’m much happier with the resulting fit through the legs. I looked at a lot of reviews of this pattern, but no one mentioned problems with the width of the cuffs/legs. I think it is likely one of those plus-size grading issues where all parts of a pattern get graded up equally despite the fact that plus size bodies aren’t proportioned that way. In other words, having wide hips does not mean you have the ankles of a severe edema patient, no matter what the grading formulas think. So if you are thinking about making this pattern in an XL or XXL, be mindful of the width of the lower leg. 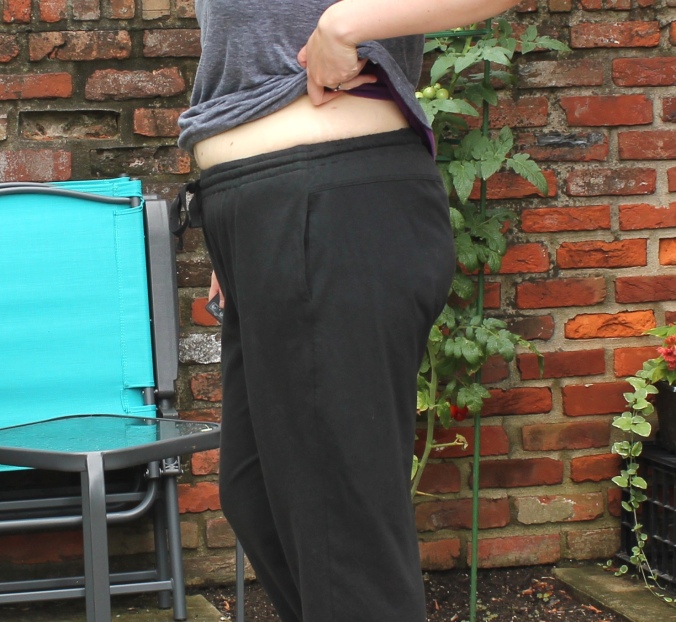 This photo shows some of the design details on this pattern–it has a back yoke and forward seams with inseam pockets. The front is finished with faux-fly topstitching (which I did not get a good picture of). The waist band is a 3-channel fold-down waistband that has elastic in the top and bottom channels and a drawstring through the middle. The yoke gives a better fit than your standard elastic waistband pants, and all the other details kept this from being a completely boring sew and make the finished pants look a bit more polished.

I’m really happy with how these turned out–they fit well, they are easily the most comfortable pair of pants that I own, and while I am not one to go out and about in sweats, I appreciate the fact that I now have at least one pair of lounge pants that are decent enough to be worn out of the house on a quick errand.

Now that I’m back in the sewing swing of things, my Ginger jeans are officially underway. I just finished my basted fitting so it’s on to the actual sewing!