A long while ago, I attempted two different projects with two beloved pieces of fabric and I managed to screw them both up. It was so incredibly disappointing to look at those failed projects and think about all the things I wish I would have done differently. But the fact that I loved the fabrics also made me hold onto them for much longer than I probably would have otherwise while I puzzled through a possible salvage operation.

It took about 15 months, but I finally figured out how to get a wearable garment from both projects, starting with this shirt. While I was still working on my tulip-print Stevie Top, I ended up moving my fabric stash into a new storage cabinet and, in the process, found myself puzzling over the remnants of this gray and black pinstripe jersey and wondering how I might get some kind of top out of the pieces.

This jersey is from Mood and it feels lovely—it’s a cotton, rayon blend that is soft and completely opaque while still being lightweight. It also has very little stretch—maybe 15% at most—which makes it a poor candidate for a lot of the knit top patterns I have. I didn’t really have enough fabric to make something with sleeves but also didn’t think I would get much wear out of a tank top. I started wishing I had a knit pattern in a style similar to the Stevie top when I realized that the Stevie pattern would probably easily work with a fairly stable jersey. 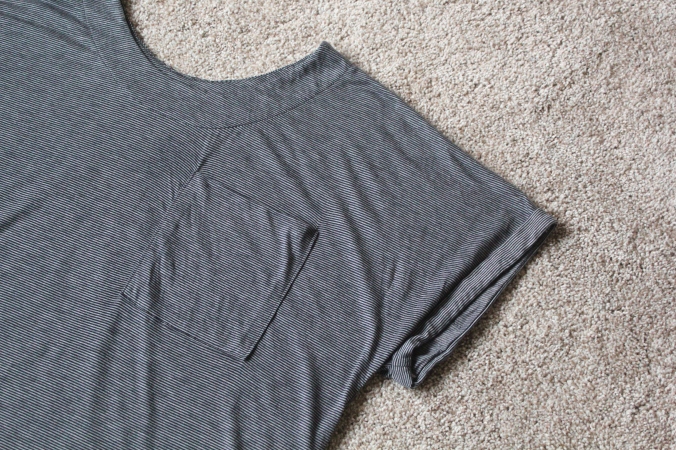 The only significant change I made to the pattern was to eliminate the back closure, cut the seam allowance off the center back yoke, cut the yoke on the fold, and then redraw the back facing piece to match the new yoke. I kept the top-stitched facing because I thought the detail of the stitching would complement the fabric and the style. I wanted to keep the back yoke because it made it easier for me to work with the fabric scraps I had on hand, but I also wanted to play around with the direction of the stripes, so I cut the lower back with the stripes going vertical. I had just enough fabric to cut out the pocket piece, so I added that to the front for just a bit more detail. 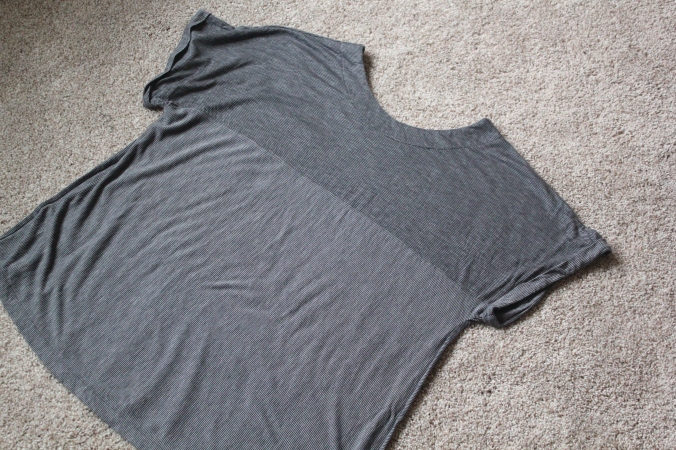 I love the resulting shirt. It’s not perfect—the floppiness of the fabric means I had to tack the sleeve cuffs down in a few places, sometimes the facing and necklines wrinkles a bit at the neckline, and the pocket has a tendency to sag. But there’s something about the whole look of the shirt, including its imperfections, that just looks cool and casual and modern. It’s really just a t-shirt, but it makes me feel fancier than any other t-shirt I own.

I’m so happy that I’m getting to enjoy this fabric now, and even happier that I’ve turned a failed project into a big win.