I tried making cinnamon rolls two Christmases ago, and they didn’t rise enough and didn’t bake evenly so that rolls in the middle of the pan were too doughy to eat. It was one of my more demoralizing baking experiences and put me off of cinnamon rolls until this past Christmas when I decided, rather spontaneously, to make cinnamon rolls for breakfast while we were staying with my dad. Since I had seven people to feed, I’m very happy to report that these turned out great. To quote my dad: “These are the best damn cinnamon rolls I’ve ever had.”

These rolls are an adaptation of the Cranberry-Orange Breakfast Buns from Smitten Kitchen. Since these were a last-minute decision (at least, about as last-minute as you can get with a yeasted breakfast dish) and since I was at my dad’s house in the middle of nowhere, I had to do a bit of improvising with the recipe beyond simply using it to make classic cinnamon rolls. I didn’t have any buttermilk so I made sour milk with vinegar. My dad only had active dry yeast, so I proofed it in some warm milk and a pinch of sugar before mixing it with the other ingredients. We were short on eggs, so based on one of the tips at the end of the original recipe, I swapped two of the egg yolks for a single, whole egg.

The biggest challenge was that my dad didn’t have any powdered sugar on hand. I ended up dissolving granulated sugar into some milk, adding a splash of vanilla and a sprinkling of cinnamon in the process. My improvised glaze was still a bit grainy, but it worked well enough and definitely didn’t detract from what ended up being a fantastic batch of cinnamon rolls.

The view from my dad’s back yard–the benefit of living in the middle of nowhere. (Photo taken by Aidan.)

I think of cinnamon rolls as a special occasion food—not the kind of thing you’d eat on a daily basis—and to that end, these were exactly what they should have been: soft, rich, and gooey. They are, of course, sweet, but not the kind of super-sweet that will hurt your teeth or your stomach. This recipe also makes it easy to make cinnamon rolls for breakfast without waking up four hours earlier than everyone else. You mix up and knead the dough the night before, let it rise, roll out and form the cinnamon rolls, and then let the cinnamon rolls rise in the pan overnight in the refrigerator. The original recipe tells you to remove the rolls from the refrigerator and let them sit on the counter for 30 minutes before baking. I wasn’t happy with how much they had risen at the end of the 30 minutes, so I left them sitting on the counter for a full hour before putting them in the oven. The rolls rose beautifully in the oven and baked very evenly. 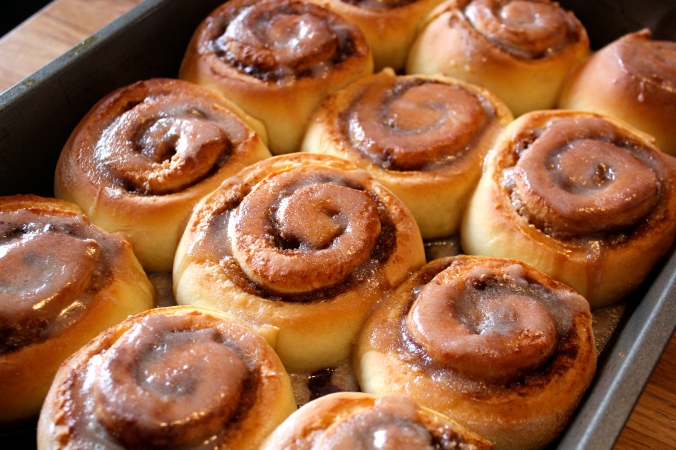 This recipe makes a dozen cinnamon rolls. Although I improvised a glaze using granulated sugar, I’ve included the ingredients for a basic powdered sugar glaze that I’ve used before and would use again the next time I make these.

My semester is done! I’ve powered through the stack of final exams, tallied the final grades, and pushed all the papers that need pushing to wrap up the last 15 weeks of teaching. Of course, I’m still writing and researching and generally chipping away at my dissertation, but the end of the semester means a bit more time for sewing, holiday baking, and catching up on some blog posts.

These scones were a last minute addition to our Thanksgiving menu when I decided the day before that I’d like something special for breakfast Thanksgiving morning. I wanted to use some apples that we had on hand and Aidan wanted scones, and thus began the hunt for an appropriate recipe. I’ve made these apple cinnamon scones from King Arthur Flour before, and they were excellent. Unfortunately, the recipe calls for several ingredients that I didn’t have on hand, and there was no part of me that was willing to brave the grocery store just for scones. Since sour cream was the best liquid I had on hand (it’s weird to think of sour cream as a liquid, but it functions as one in baking), I started looking for a sour cream scone recipe that I could tweak a bit to make apple scones.

Ultimately, I ended up adapting a recipe from The Kitchn for Sour Cream Strawberry Scones. I omitted the brown sugar crumble topping called for in the recipe, swapped the strawberries for a chopped apple, and added some cinnamon to the batter. In the end, these scones turned out well and were a great way to kick off our holiday. The sour cream gives them a good flavor and a nice, tender texture. They are only slightly sweet—appropriate for breakfast and not the kind of scone that you would mistake for dessert. If you like a sweeter scone, it would be easy to add a bit more sugar. Perhaps 1/2 a cup instead of 1/4. Using the crumble called for in the original recipe might also make the scones a bit sweeter. The next time I make these, I might also toss the chopped apple in a cinnamon sugar mix before adding them to the batter. Regardless, this is a solid recipe. And the best part is that you can make these scones the night before—just mix up the batter, shape the dough, cover with plastic wrap, and keep them in the refrigerator overnight. I’m looking forward to making it with strawberries when winter is over—perhaps as a way to celebrate the end of the spring semester!