Last summer, I had hoped to sew Jude an outfit for his first birthday party. I had the fabric already and was in the process of picking out patterns when I realized that my time was limited and making him an outfit was just not a priority (especially when a package showed up from my mom with a perfectly-cute monkey-themed outfit he could wear instead).

The camp shirt patterns in the summer kids issue of Ottobre reminded me of my previous plans, and now I’ve finally made the little banana outfit I originally envisioned. As is typical with the Ottobre kids issues (at least with the boys’ patterns), they have a version of a basic camp shirt to fit their whole kids range—one in their infants/toddler sizes, one in smaller kids sizes, and one in larger kids sizes. I really love it when they do this with a basic, workhorse style. It’s nice to know that once Jude grows out of a pattern I’ve used, there is likely a larger version available in the same style. And I think they do a nice job of adjusting the details for the larger sizes so they have a touch more sophistication to appeal to older kids’ tastes. In short, I have endless love for Ottobre. This is nothing new.

Anyway. Jude is still at the top end of their infants range, so this is the Little Smart Summer Shirt (#8) from Ottobre 03/2019. I cut a size 86 based on my vague memory of his height at his 18 month well-child visit in February. In other words, I probably should have actually measured him again but was too lazy. Luckily, it fits him pretty perfectly right now, but it will definitely be a one-season-only garment.  I think he’ll be ready for a size 92 in the fall, which seems to open up a whole new slew of pattern possibilities from Ottobre, so I’m very excited about that.

The instructions for this pattern were not the greatest. I mean, I still think Ottobre instructions are miles ahead of, say, Burda or Style Arc. But even with a close read, this pattern required some improvising and I felt like some of the instructions came out of order so it’s worth reading them all through very closely before you begin. The pattern wants you to hem the outer edge of the facing, which I was not interested in doing. I ended up just cutting away the seam allowance I’d added to the piece (per the instructions) and serging the edge to keep it clean. The pattern also calls for horizontal buttonholes and only 4 buttons, which didn’t seem like enough to me. I made vertical buttonholes and ending up using 6 buttons.

He is definitely telling me about the trash cans in this picture. Jude is quite passionate about trash and recycling right now.

The fabric for the shirt is a Cotton + Steel cotton lawn print from a couple of years ago. I had 2 yards of this fabric in my stash and used way less than that for this shirt, so Jude might get a duplicate shirt next summer. It was really easy to work with and is incredibly soft.

The shorts are made from some gray Kaufman Brussels linen blend fabric I’ve had in my stash for several years. I used the Kid Shorts pattern from Made Everyday–I cut a 2T and made the view with the lined pockets (using the banana print fabric for the fabric lining) and the fully elasticated waist. I think I’m done with this pattern for the time being. While it’s a perfectly fine pattern, I’m not in love with the fit and, more importantly, really hate that there aren’t instructions with the pattern. You have to track down the tutorial posts the pattern designer published on her blog, which also means having to click around to different posts to reference the instructions for different pattern views. Obviously, constructing a basic pair of shorts isn’t difficult but that’s all the more reason I don’t want to have to do that kind of work to remind myself of the pattern’s hem allowance or whether or not the pocket seams have a different seam allowance than the rest of the shorts. The next time I make Jude a pair of shorts, I think I’m just going to try the Sunny Day Shorts pattern from Oliver & S. 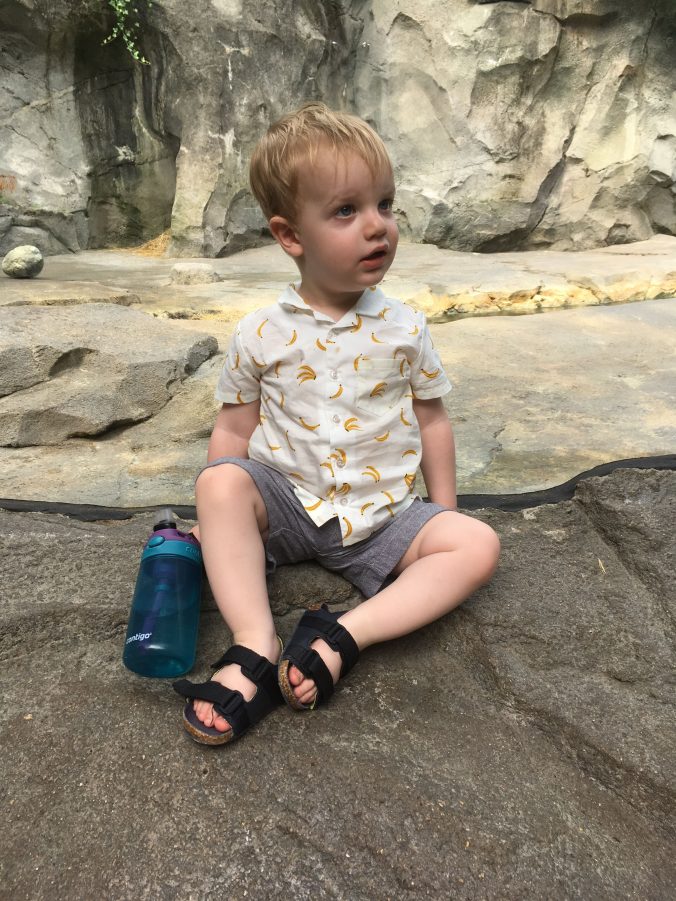 Still, this outfit turned out really cute. Jude wore this when we took his granddad and his aunt Sarah to the zoo on a very hot and sunny day. This outfit kept him cool and he looked very sweet in it. He already has plenty of clothes to get him through this season, but I’m going to have to make him more shirts like this next summer!

In 2014, when I had been sewing for about a year, I made some hooded robes for our nephew and our godson. Both boys were 3 at the time and have definitely outgrown the robes now that they are getting ready for 1st grade in the fall. But our nephew has a pair of toddler twin brothers who are just growing into the robe, so my sisters-in-law requested a second robe so the twins can wear them together. It’s a simple pattern that offers the chance to sew with bright colors that I would never wear myself, so who could say no? 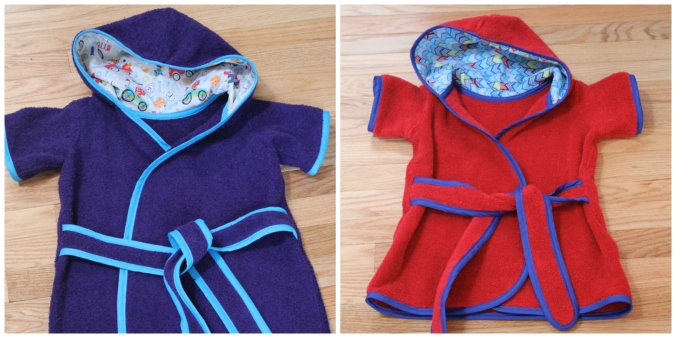 I used the Beach Robe pattern from Made Everyday by Dana (which was previously just MADE). I made the second size, which is meant to fit 18 mos – 3 years. Like the first robes, I opted for short sleeves, a partial tie, and a lined hood. Like the first robes, I also used the cheapest, thinnest towels available at Target for the fabric. You want to use a thin towel or the robe would end up way too bulky. I’m pretty sure the towels I got were labeled “quick dry” towels or something like that. I think they were ~$4 each? 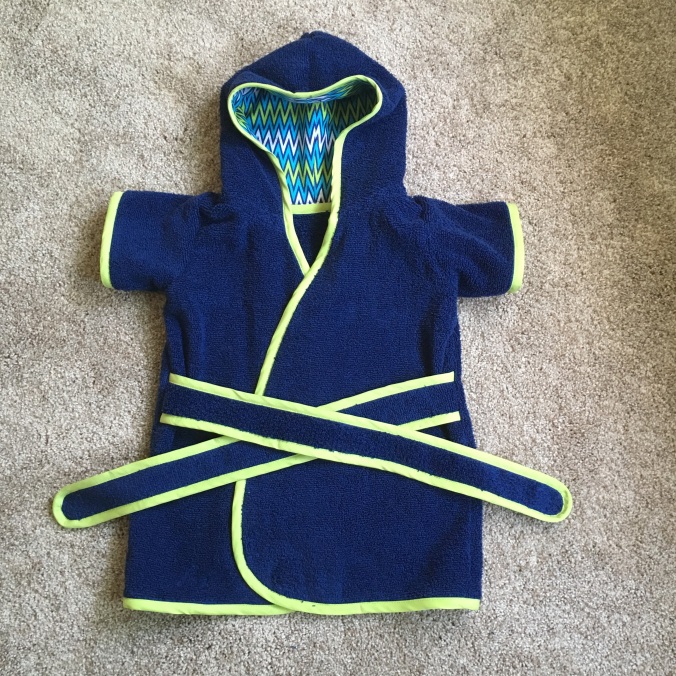 I like this pattern enough to have made it three times now, and I like it enough to make it again in the future, but there are some things about it that annoy me. One of them is that the pattern doesn’t indicate how much fabric you need to line the hood. For the record, I bought ½ yard of lining fabric for the first two robes I made, but I easily got the hood lining pieces for this robe from a single fat quarter. My second big annoyance is that the pattern doesn’t include a pattern piece for the robe ties—it just gives you dimensions for cutting them. I realize that some people would prefer this to printing off more sheets for a pdf pattern, but I am lazy and would prefer the ease of a pattern piece.

I made a couple of recommendations for anyone making this pattern the first time I posted about it, and I still stand by them. The pattern recommends attaching the bias binding in one pass, which is bananas to me and seems like it would be so sloppy and frustrating. I did the more traditional 2-step application method, sewing one side of the binding on at the fold line, folding the binding over the raw edge, and then top-stitching the binding in place.

I’d also recommend ignoring the order of construction in the pattern and sewing the sleeves in flat. I actually set them in on this robe (because I was too lazy to go back and read my own post on this pattern) and felt it was unnecessarily fiddly. My final recommendation is that you really have to accept that the ends of the ties are never going to be perfect—you’re probably going to end up with a bit of wobbly stitching and a couple of puckers in the binding. The ties on this robe definitely benefitted from three more years of sewing experience, but still. It’s hard to get ½” wide double bias binding around that tight curve. (I think this last recommendation is mostly for me, because I have issues with perfectionism and those damn robe ties make my eye twitch.)

I’m equally horrified and fascinated by the possibility of seeing the new robe next to the original, given how much I think I’ve grown as a sewist in the last three years. Making this pattern definitely felt a lot easier and faster this time around, and I had the benefit of no longer being intimidated by bias binding. Plus, having a serger definitely helped—it was so much easier to finish the seams and helped keep the bulk under control.

Since I had fun making a tiny thing in bright colors, I took another hour or so to whip up a little pair of shorts with some extra fabric that’s been hanging out in my stash for years. This is another Made Everyday pattern—the Kid Shorts Pattern. I sewed up the 12 mos size in the longer leg length with a simple elastic waistband and front pockets. I have a weakness for tiny, useless pockets. My hope is that our baby will be able to wear these next summer, and it should be pretty easy to adjust the elastic to fit better if necessary. If they don’t fit, I’ve got an easy gift on hand for someone else’s kid in the future. Either way, a quick and fun little project!