I’ve fallen into a bit of a routine or a system for acquiring new sewing skills and sewing confidence. While I’ve sewn a few specific patterns that I’m not likely to repeat a million times over, I’ve been mostly concentrating on picking a particular kind of garment and then sewing it multiple times (and sometimes trying a couple of different patterns) until I get to a place where I’m really happy with what I produce. This isn’t a process that I decided on consciously—I didn’t sit down before I started sewing and map out a specific plan to sew the same thing over and over again. Rather, when I finished a project, I found myself wanting to go back and do it again so I could tweak and refine and improve. The drive to do it all over again might come from wanting to get a cleaner finish, or it might come from wearing the item once or twice and recognizing fit issues I didn’t see before. 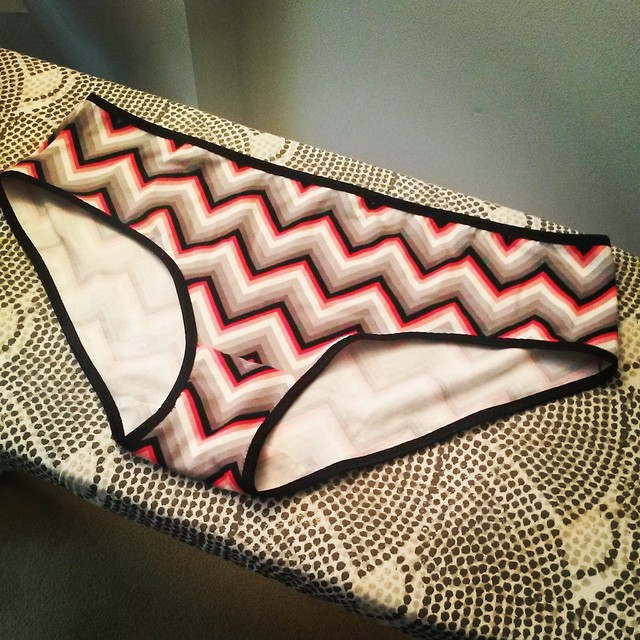 My most recent version of Jalie 2568

One of my first ongoing projects was, of course, underwear. I made something like 8 different pairs before I got to a place where I was happy with the construction and the fit of the final product. And from there, I’ve continued to hone my sense of what fabric will work best. Right now, I’ve been sewing a lot of basic t-shirts and pajama pants, refining fit and working on better construction techniques. I’m also still slowly working to fit a basic button-down shirt for myself and planning to try fitting a basic pair of pants in the near future.

The first pair of socks I made when I got serious about knitting (on the left) and, 8 pairs later, the first really excellent pair I made. The pink ones are five years old and still in rotation.

Looking back, I can see that I’ve basically done the same thing with knitting. My knitting (including not just my range of techniques, but also my knowledge of yarn, and my confidence working with patterns) took a dramatic jump in quality when I started knitting almost nothing but socks back to back. A couple of years later, when I decided to focus my attention on getting a good fit with my sweaters, I spent an entire year knitting sweaters that might have had different design details, but used the same basic construction and allowed for the same shaping methods. And when two of those sweaters didn’t turn out, I ripped them out and started over again. I finessed the fit with each attempt until I’ve reached a point where I not only feel comfortable adapting the fit on a basic, pieced sweater pattern, but feel confident enough to play around with fitting and shaping in other sweater styles. It’s not as though I’ve reached a place where I think I have nothing left to learn or where I think I’m an expert–but I am at a place where I feel confident that I can get a reasonably good result and where I can focus on learning higher-level skills.

My first serious and successful experiment with sweater fit. I wrote more about this project here.

People have lots of different methods for acquiring new crafting skills. Things that appeal to other people like taking a beginner’s class or the “add a new skill with each project” approach described recently on the Colette blog don’t necessarily appeal to me, and I’m sure there are a lot of people who would think that what I’m doing is boring. But it’s an approach that fits my personality. I’m a creature of habit, and I like to approach things methodically. I’m definitely a perfectionist, and while I try to keep my perfectionism in check so it doesn’t completely suck the joy out of life, I’m still always on the lookout for ways of doing things better. I also have very simple, minimalist taste in clothing, so it makes sense to me to spend time on getting a good fit and refining techniques. There’s also a very tangible sense of accomplishment that comes from making the same thing over and over again when each repeat just gets better and better.

Several sweaters after my first experiment, I made another basic pullover with an even better fit. More on my Blank Canvas pullover here.

It’s been helpful to realize that there is a kind of method to my craft madness and to recognize the positive effects that method has had on my skill level in the past. I spent a good chunk of time at the end of June working on fitting McCalls 6035 but lost momentum when I needed to do a second muslin. The loss of interest was less because I didn’t want to do the second muslin and more because I started thinking: What if I put all this time in and it turns out to be not that great? Or when I would think about working on the muslin, I’d think: Why bother? I’m just going to screw it up. But now that I’ve been reflecting on my process, I feel more at ease. With the fitting I’ve been doing, the chances that I’ll produce a wearable shirt are relatively good. Will it be a great shirt? Probably not. But it will likely motivate me to sew two or three more, and at some point, I’m going to hit on something that is looking pretty damn good.

The way I approach things like knitting and sewing might not make for the most thrilling blog material, but hopefully my attempts to document my trials, errors, and realizations are still useful to someone!