Many months ago during Me-Made May, I pledged to spend at least 20 minutes a day sewing things for myself with the goal of getting myself back into the habit of sewing after a long post-baby break. I mostly kept the pledge, only missing a few days, and it worked—I’ve been sewing pretty regularly since then, which feels awesome. Making that pledge prompted me to finish up the striped cardigan I’d started working on a year earlier. The other big project I finished in May was this shirt.

This is the Willamette shirt pattern from Hey June patterns. I kind of started this project on a whim after seeing a couple of people on Instagram sew up the pattern. I’ve been preferring boxier, woven shirts to my usual t-shirt lately and I really liked the casual, easy style of the Willamette. And while I have been intending to get into shirt making for years at this point, the truth is that I find both the idea of fitting woven tops and the process of sewing a button-up shirt completely intimidating. The Willamette seemed like it would be forgiving on both points.

I sewed View B up in some black cotton voile I had in my stash. Based on the sizing advice in the pattern, I made a size 16 with a 1” FBA. It has been a long time since I’ve done an FBA, and I managed to screw it up a bit and wound up with a dart that’s too low. I figured out where I went wrong so I won’t do it again, and I think the black fabric conceals the issue for the most part.

I do wish that I had spent a bit more time thinking about the relationship between sizing and fabric. After I finished my Willamette, I saw someone talk about deciding to make this pattern one size smaller than their measurements indicated to account for a fabric with more body—this is what I really should have done. I think I would love the ease in this pattern with a more fluid fabric like rayon challis, but the cotton voile is stiff enough that it kind of stands away from my body, which makes all of the extra ease feel very awkward.

I was really excited about this shirt when I finished it, but I’ve actually only worn it once and even then I changed out of it after a couple of hours. I’ve really only recently started wearing woven shirts more recently, so I’m still learning what I like in terms of fit and fabric. I do like a boxy and slightly oversized fit, but I want it paired with a softer and more fluid fabric, which is not what this voile is.

However, this project was a huge confidence builder for me. It kind of reminds me of when I made the Jalie Eleonore Jeans—the project itself was a complete failure, but it showed me that I was capable of doing all the basic sewing tasks required to make an actual pair of jeans, which I ultimately ended up doing. In the end, I don’t like the way this shirt looks or feels on me, but it has helped me get over the weird anxiety I’d built up around fitting and sewing a button-up or popover shirt. I can see now that I am competent enough to take a shirt project on, and I’m excited to do that soon.

I’m also really looking forward to trying this pattern out again next summer with a rayon or linen fabric that I think will better suit my personal preferences. I’m becoming a big fan of Hey June patterns (I’ve made the Halifax Hoodie twice and have two versions of the Santa Fe top waiting to be blogged). The quality of the drafting and the instructions is great and the casual, laid-back style is right up my alley. 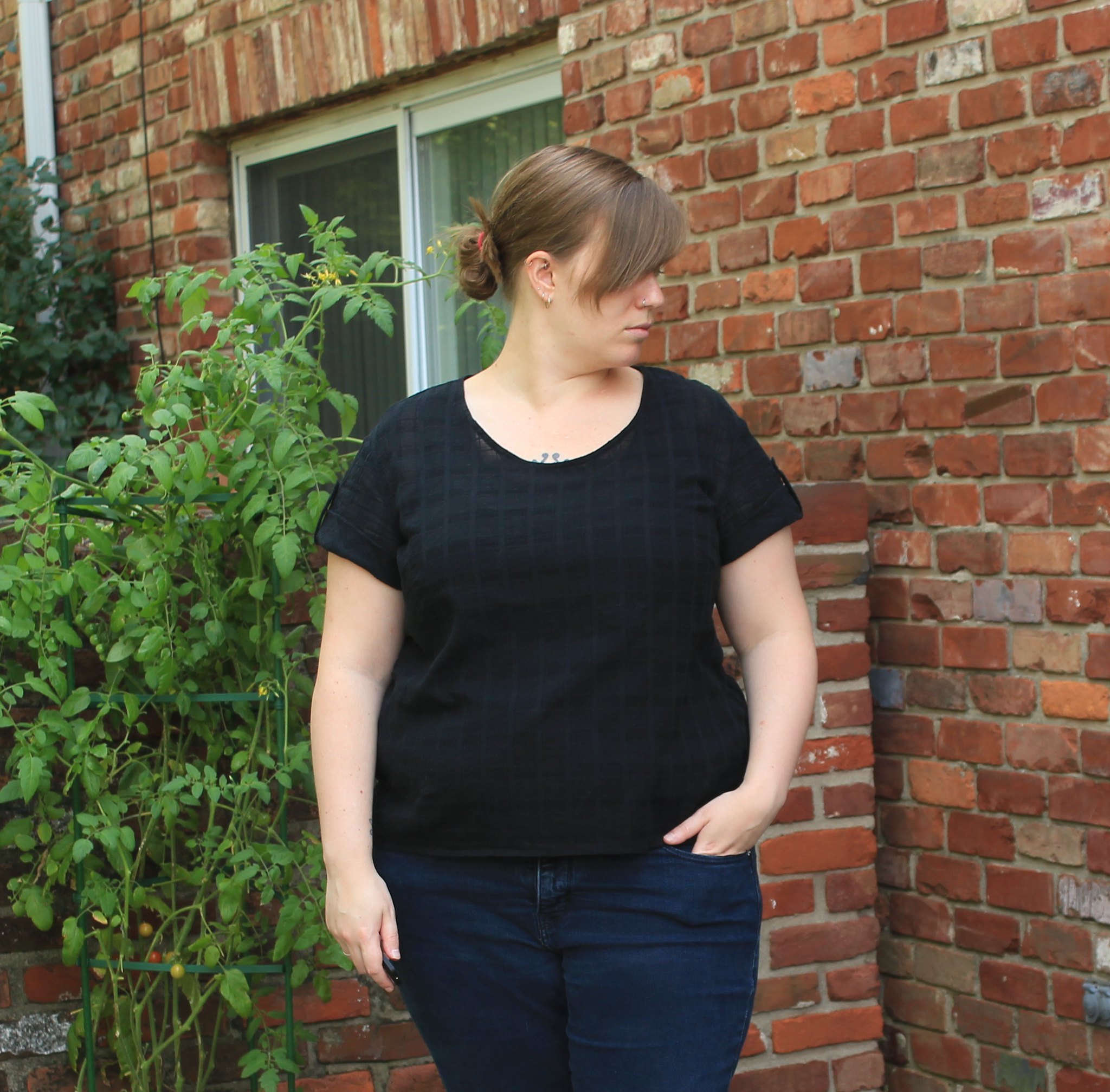 This is the Onyx Shirt from Paprika Patterns. It’s a pretty basic woven tee pattern with a crop top option (thanks, but no thanks). But it has some nice details that I really liked: a slight dropped shoulder, the option for a scooped neckline, and—the big seller—a sleeve cuff and epaulette detail. I ended up making View A with the scooped neck option. 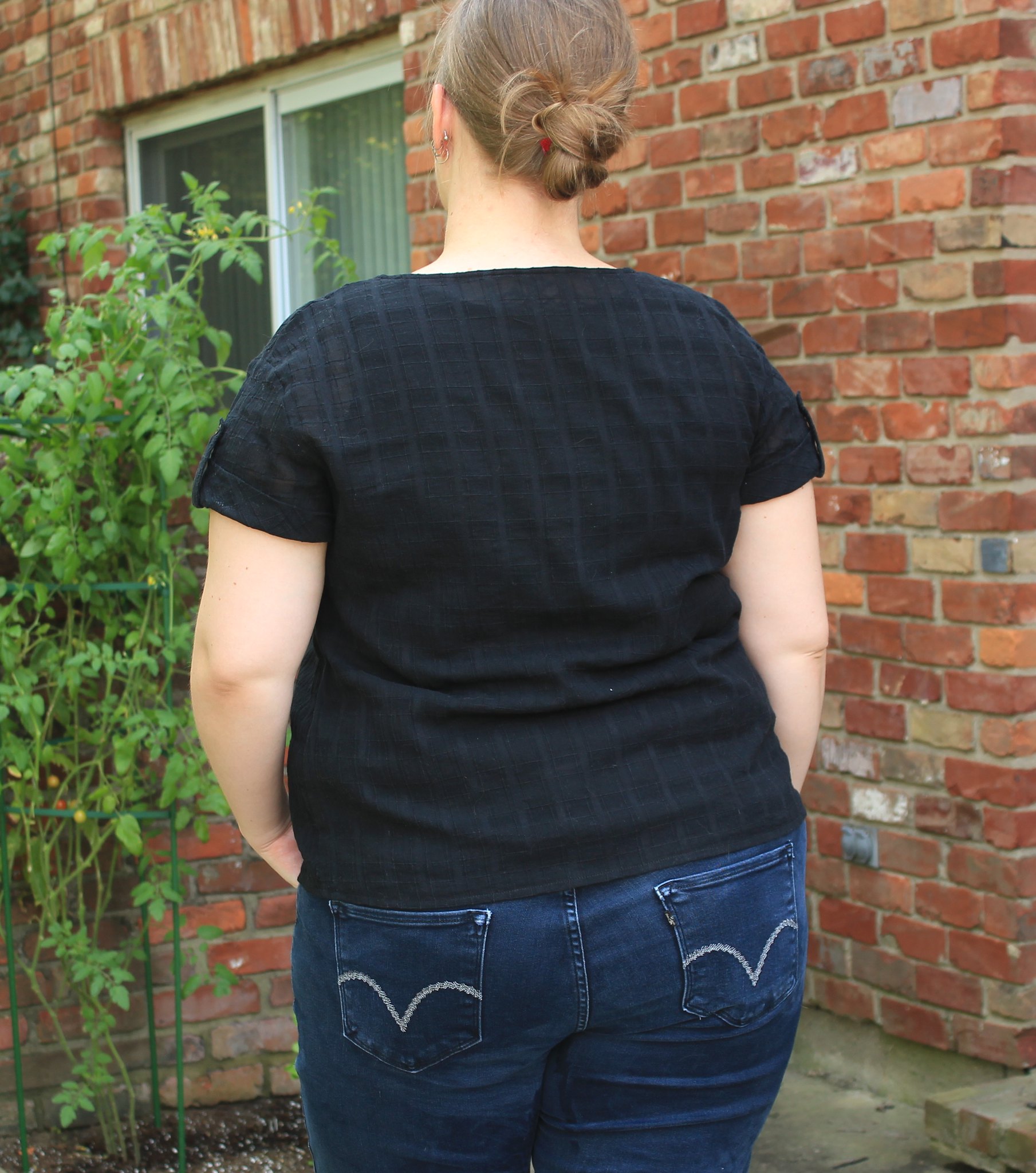 I didn’t make a muslin since it was a pretty basic style and since my fabric was something ridiculous like $2/yard. I did, however, make a few fit alterations before cutting out my fabric. Starting with the size 7, I:

For a first go with this pattern, I’m pretty happy with the fit. Next time, I’ll add a bit more width to the back hem so it falls better at the back hip. If you look at the profile view picture farther down the post, you can see that the side seam is unbalanced and is being pulled towards the back. 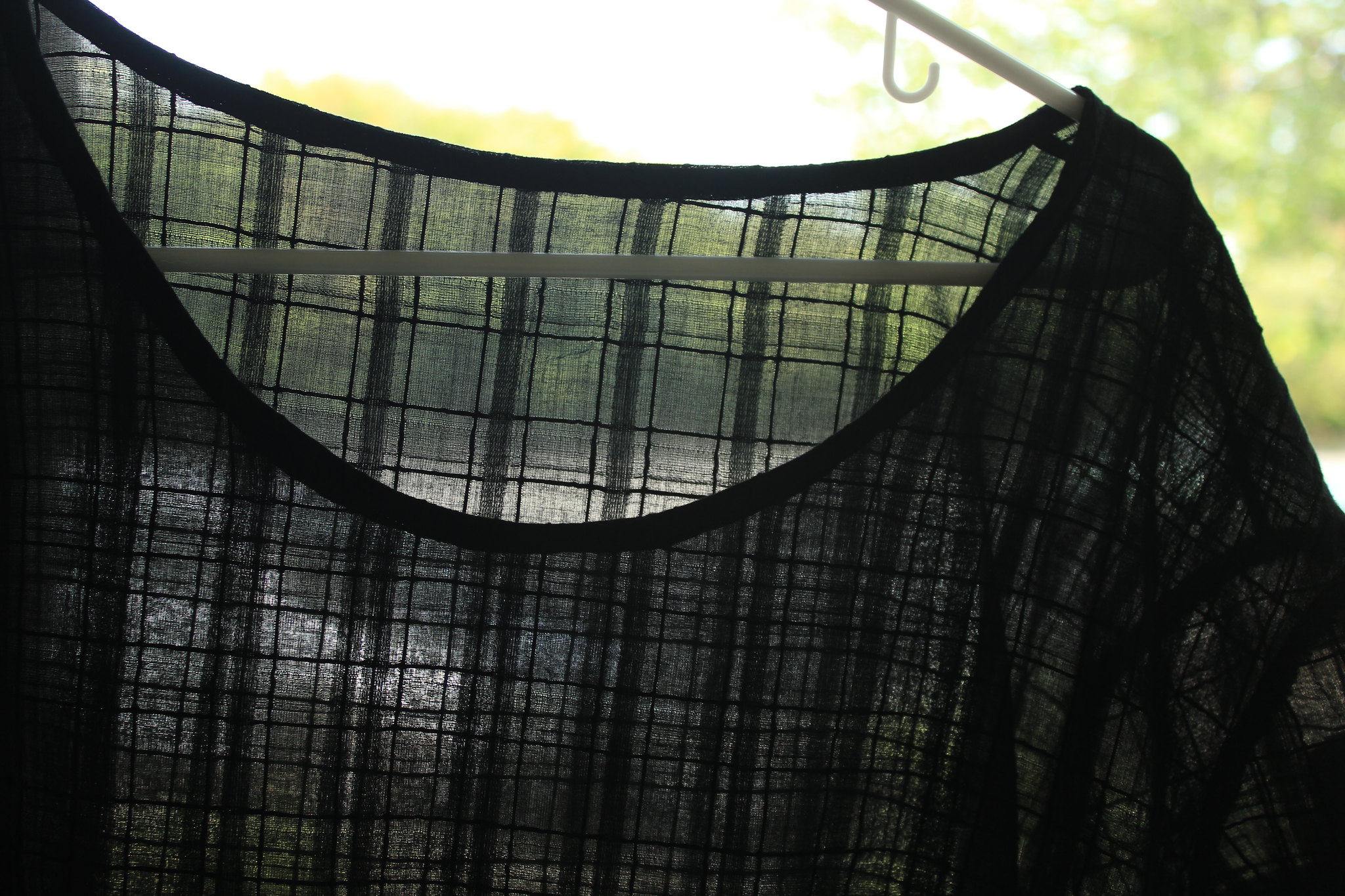 The fabric is a cotton voile from Fabric.com that has a plaid pattern woven into it. I believe Fabric.com described it as a “shadow plaid.” The texture is a nice alternative for the print-phobic like me. Plus, while I did make an effort to match the horizontal lines of the plaid along the side seams and to center the plaid down the front and back, I didn’t have to worry too much about messing up the plaid matching at the sleeves and such since the plaid design isn’t highly visible. This fabric was very eager to fray, so I used French seams wherever I could and finished the sleeve seams with a 3-step zigzag stitch. 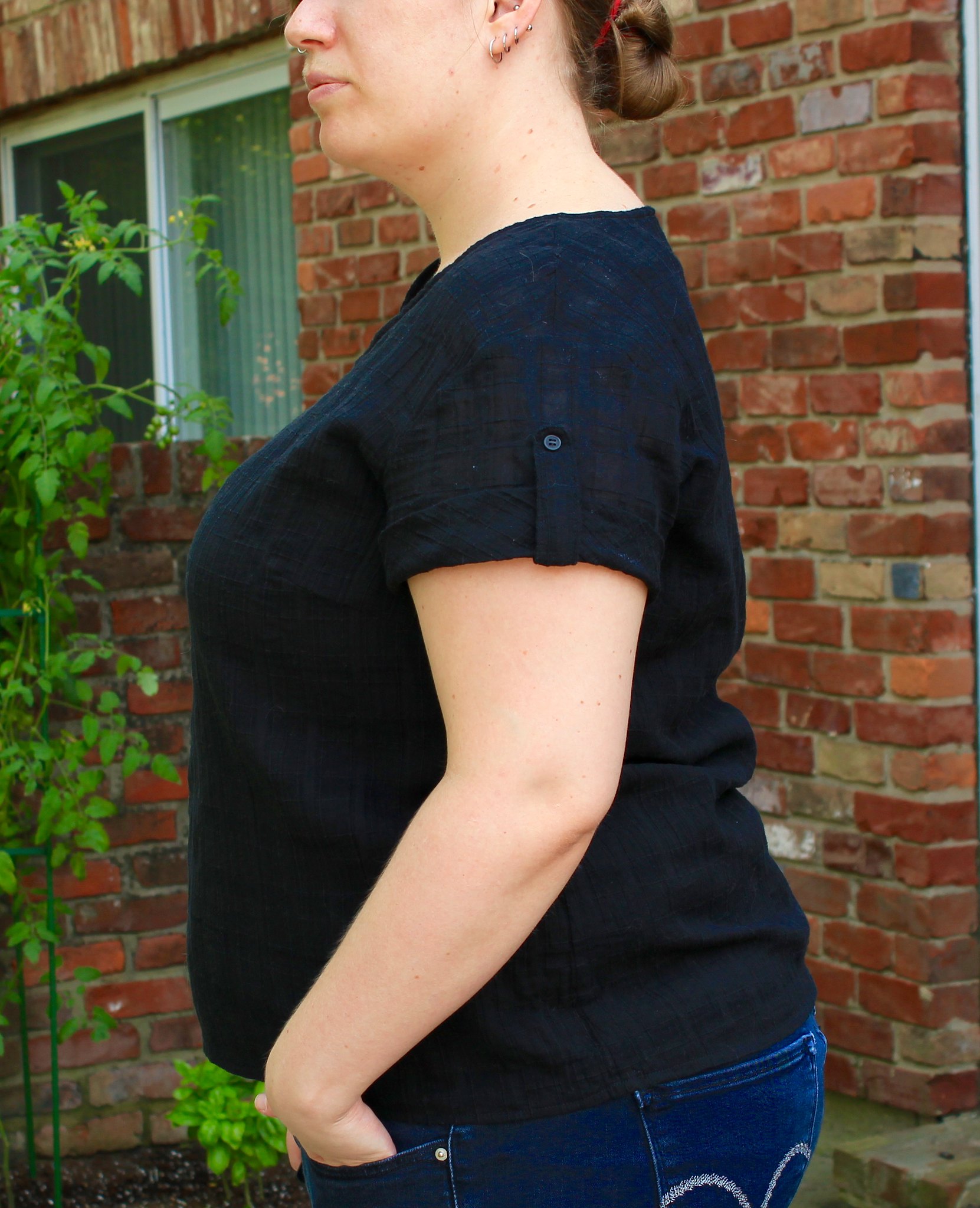 My only complaint with this pattern has to do with the cuffs. The way the cuffs are finished, you end up with an unfinished edge that gets folded down to the edge of the sleeve and that remains invisible so long as the cuffs are in place. But the cuff is only secured by a line of stitching at the sleeve seam and then by epaulette. The end result is that it is pretty easy for the cuff to flip out of place and show the unfinished edge. I recently finished a pair of pants with a cuff that is invisibly secured with a hem stitch. If/when I make this pattern again, I would probably try the same technique on the sleeve cuffs to keep the cuffs from flipping down. 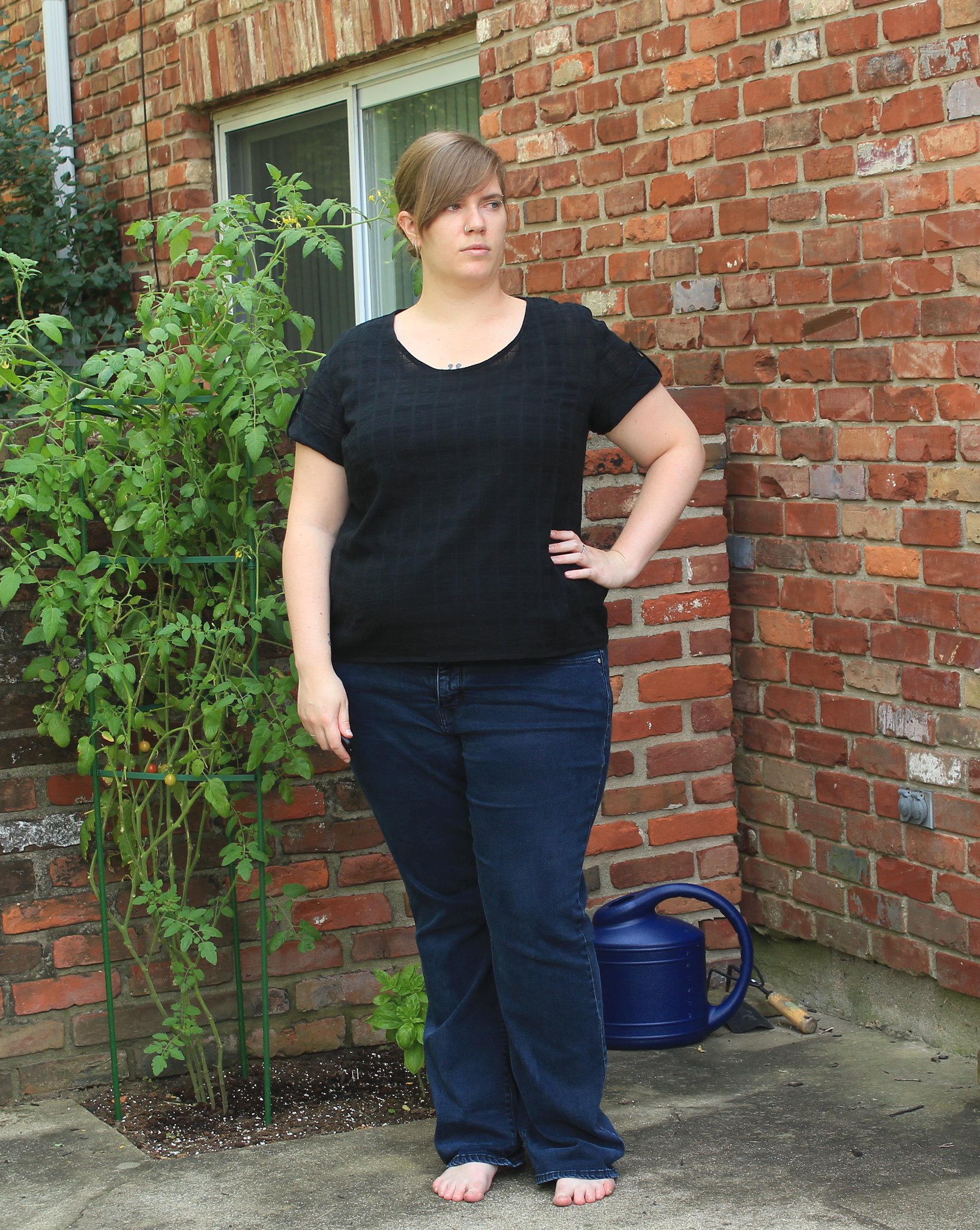 I wasn’t sure I would actually like a woven tee, but I’ve really enjoyed wearing this shirt and I think it looks pretty good on me. I actually wore this with a pair of gray pants for the new faculty orientation at my college and no one gave me side eye. So two thumbs up for that. 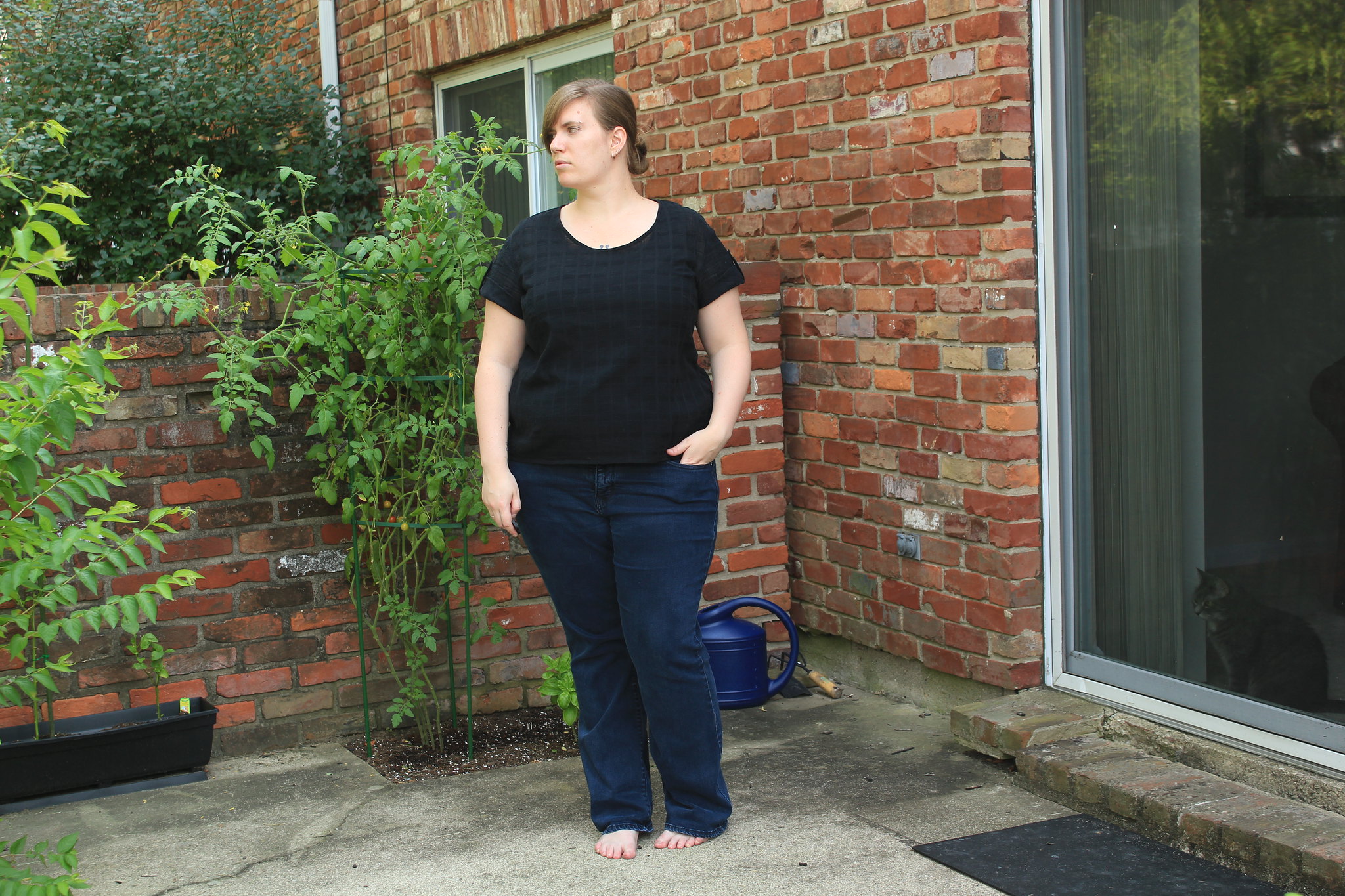 Ramona sat at the window watching me like a creeper as I photographed four different projects. Such a nerd.