Whenever I take a long break from either sewing or knitting, I experience a lot of stumbling and fumbling when I pick it back up again. It’s like I haven’t forgotten how to “ride the bike,” so to speak, but I’m pretty wobbly for a while. This wobbliness resulted in two failed projects (one of which didn’t even get finished) when I started sewing again mid-March.

The first failed project was a version of the Jalie Dolman Top (Jalie 3352) that I made with a really nice marled sweater knit—I’m fairly certain the fabric is a cotton/rayon/Spandex blend. It’s soft, lightweight but still opaque, has great drape, and washed and dried really well. I originally bought it with the intention of making a long-sleeved Concord Tee so that I would have just a basic, lightweight sweater in my closet. I’ve been kind of kicking myself for changing plans, but whatever. 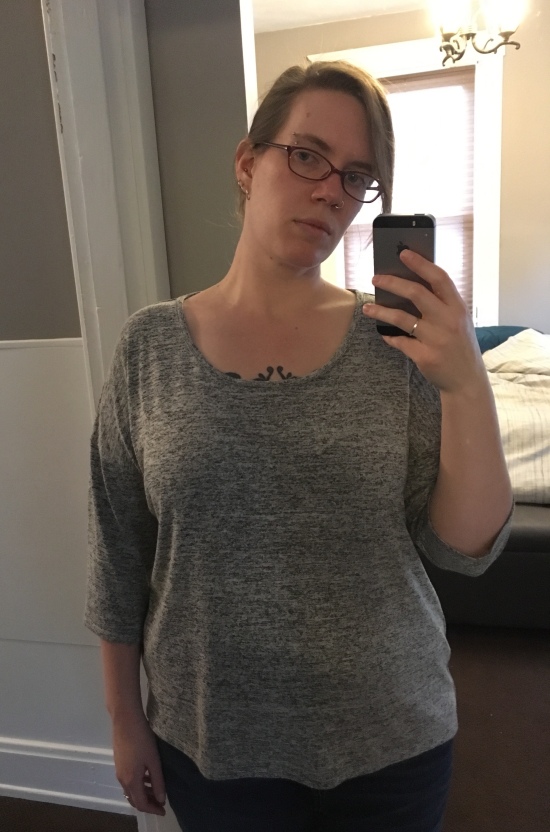 I don’t like this pullover. I’ve worn it a couple of times and it just feels sloppy to me. I think there are two primary issues at play: first, the fabric has substantially more stretch than the pattern calls for (~75% vs. 40%); and second, I made some ill-advised sizing choices in the hopes of getting something that would be more wearable during the spring as I moved into my second trimester and then again in the fall in the middle of unpredictable post-partum fluctuations. (This was also the logic that led to the pattern switch—I thought the looser style of the Jalie Dolman would be more wearable than the fitted style of the Concord. The overall lesson here has been that it really isn’t worth it to try to predict what my body will do or what I will want to wear in the future.)

Given the stretch in my fabric, I think I would have been best off cutting a size down from my measurements. But what I actually did was cut a size larger than my measurements. The result is something that just doesn’t feel good on me and that I don’t enjoy wearing. The body feels completely shapeless and dowdy and the sleeves are too loose and long—it basically looks nothing like the pattern photos or other people’s finished projects suggest it should look like. To add to the frustration of this project, my twin needle gave me a hell of a time and kept skipping stitches and breaking threads, which really made me feel like I had no idea what I was doing at my sewing machine anymore. 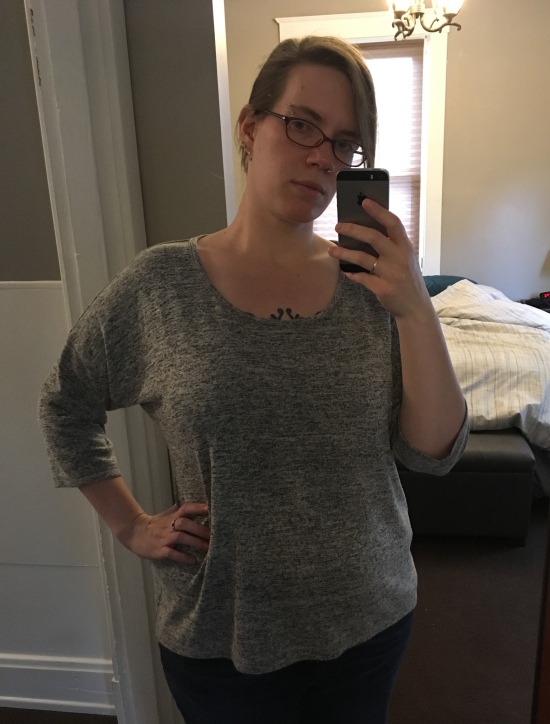 The twin needle issue was easily solved—I realized about a week later that I just needed a new needle. I ordered one and all my twin needle problems are magically gone. As far as the pullover goes, it’s still hanging in my closet, and I think at some point I will take apart the side and sleeve seams and either recut it as a smaller size or just take the whole thing in. But there’s no sense in even trying to do that right now. And who knows—maybe it will actually fit well in the fall and I’ll get a lot of wear out of it. 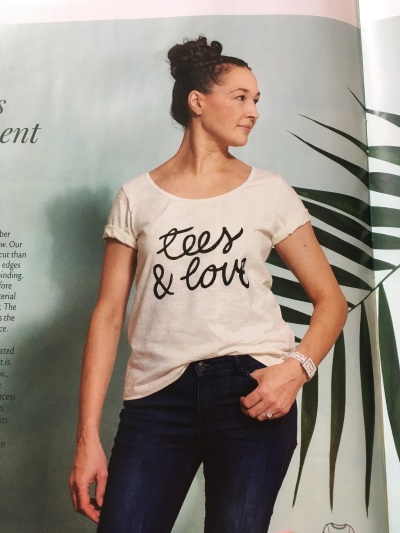 My second failure was the Statement Tee pattern from the Spring 2017 issue of Ottobre Woman. I was drawn to this pattern for the relaxed fit and because it is drafted for more stable jersey fabrics. However, I didn’t even end up finishing the first tee I made because I hated the fit on me. I found that the neckline on this is really wide. I added a neckband instead of the binding called for to get a bit more coverage and still ended up with a neckline wide enough to allow for frequent peeking bra straps. The sleeves are also quite long (which, to be fair, is more or less indicated by the fact that the pattern photos show the tee worn with the sleeves rolled up) and I would have to cut off ~2″ to get the length I want. Plus, I think it is too short in the body for this style—something I found especially surprising since I have a long torso and Ottobre tops are still usually a bit on the long side for me.

There were enough issues and frustrations with the fit and style of this pattern that it just didn’t feel worth finishing right now. The failure of the project is mostly due to the pattern, which just wasn’t what I was expecting it to be. The real clumsiness on my part as a sewer was the fact that I cut out two of these tees before testing the fit of the pattern in any way. This gray fabric is no great loss at all since it is boring and inexpensive. But I cut the second tee from a really nice black and gray pinstripe cotton-rayon blend jersey from Mood that is super soft and lovely. So I’m really kicking myself for now having sacrificed two nice cuts of fabric to failed projects.

The sadly cut up pinstripe jersey

Ultimately, I think I’ll have enough of the pinstripe jersey leftover to be able to get something out of the fabric, although I don’t know what that will be yet. And again, maybe I’ll pull this t-shirt out of my project basket at some point in the future and find that it’s totally wearable and worth finishing. Either way, I’m happy to report that this was basically the end of my sewing wobbliness and I’ve had a lot more success at the machine since.