I’ve been looking for a good, basic T-shirt pattern since I finished my version of Kwik Sew 3766 earlier this year. The Kwik Sew pattern is perfectly fine, but I wasn’t thrilled with the way that it fit me or with some of it’s design details. There are a couple of basic tee patterns from independent pattern companies like the Sewaholic Renfrew and the Doe and Deer Plantain that are pretty beloved by sewing bloggers, but they don’t come in size Busty Fat Lady. After the success of my Day to Night Drape Top, I decided to try the MariaDenmark’s Birgitte Basic Tee pattern, assuming that the sizing, drafting, and fit would be similar. 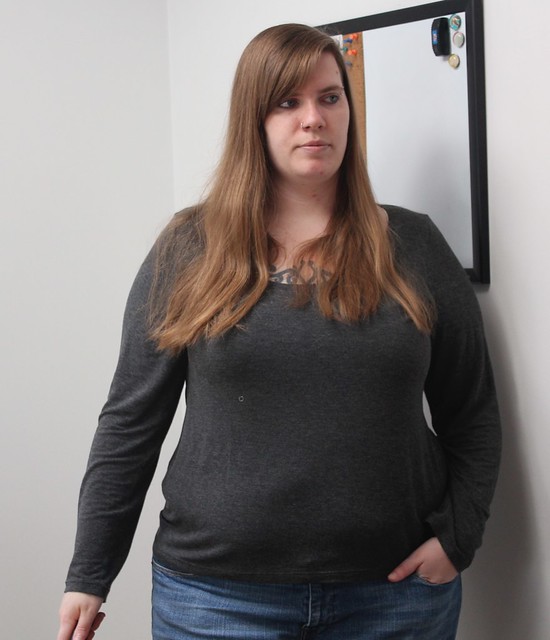 I’m happy to report that the Birgitte Tee worked out just as well as the Day to Night Drape Top, and I’m totally sold on this pattern as a really solid, well-drafted basic. I love that it’s drafted to fit up to a 4x (a 49.5″ bust, according to the MariaDenmark size chart), and I love that it’s designed for stretchier (rather than stable) knits. And as a connoisseur of deep necklines, the depth and width of this scoop neck are perfectly suited to my tastes. The pattern makes a great basic t-shirt on it’s own, with the option of a scoop or V-neck and a choice of full, short, or 3/4 sleeves. But it’s also a perfect canvas for all kinds of pattern hacks—I’ve already done one pattern hack that I’ll write more about later this week. The instructions are straight-forward and would be easy to follow even if you haven’t made a t-shirt before. It’s a pdf pattern so you have to print out the pattern (which is 24 pages) and tape the sheets together, but the pattern pages come together easily and it doesn’t take too long given that it’s a relatively simple pattern. You also have to add your own seam allowances.

Just like my Day to Night Drape Top, I started with the XL at the shoulder, graded out to the 2X size at the armscye, and then graded to the 3X for the waist and hip. I cut the 2X size for the sleeves. Also did a small FBA to add just a bit of extra width and length to the front of the shirt, once again using this tutorial from VickiKateMakes to do an FBA without adding a dart. After those relatively quick adjustments, I’m really happy with the way this fits. The fit through the shoulders is especially nice. However, the sleeves are drafted to be quite long. I didn’t add a hem allowance to the pattern piece and still ended up cutting off 1.5” of length before turning the hem up 1.” Just something to keep in mind if you’re looking at making this pattern. 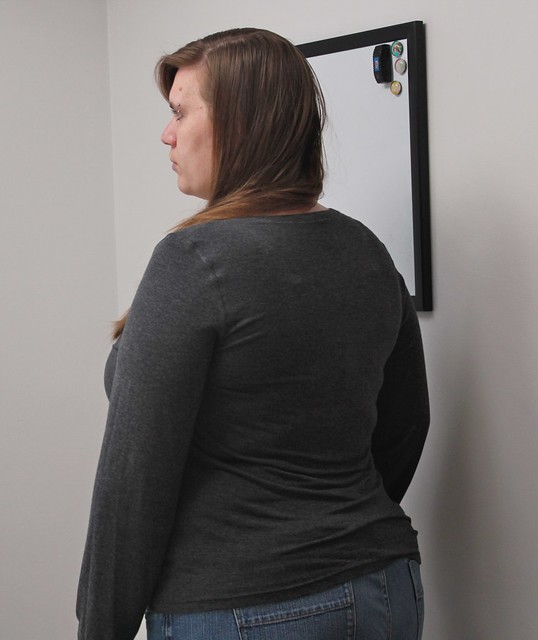 I was a bit nervous about sewing the neckband since that’s the step that gave me the most trouble the last time around. With my Kwik Sew Tee, I ended up sewing the neckband in flat, but I’m not a huge fan of the way this looks. So with this tee, I quartered and stretched the neckband per the pattern instructions. I did, however, machine baste the neckband first so I could check the fit. It laid flat everywhere but at the front of the scoop where it wanted to flip out a bit. So I unpicked the neck band and shortened it by 3/4”. I quartered the neck band again, but then moved the pins marking the quarters at the shoulder (in other words, the pins that didn’t mark the center front or center back) 3/8” closer to the the center front. This kept the neckband the same length around the back of the neck as the first version and only shortened the neckband around the front of the scoop. I repeated the basting process and the neckband looked good, so I sewed it in with the lightening stitch I use to sew all of my seams and then top-stitched the neckline with a narrow zig-zag. 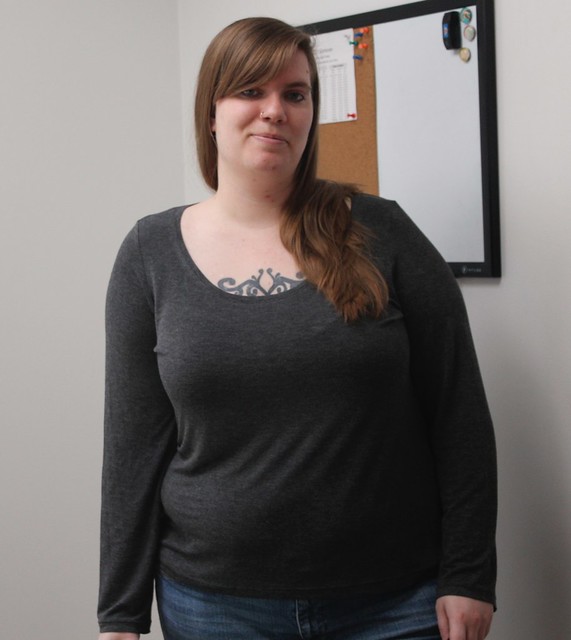 I hemmed the bottom and the sleeves with a stretch twin needle. It looks nice, but I’m not sure how I feel about the twin needle. While the twin needle looks like a hem on a RTW shirt and has some stretch, it isn’t as stretchy as a cover-stitched hem. I think that will be fine for this tee, but we’ll see how it wears in the long run.

The fabric I used makes this shirt even more enjoyable to wear. It’s a cotton/rayon/spandex blend from Girl Charlee that is stretchy, drapey, and super soft.  (I bought it awhile ago but I think it’s this fabric, which they still have quite a bit of.)  With my last two knit projects, I had a bit of a time trying to cut the pattern out on the fold, less so because the fabric wanted to shift and more so because it was difficult to got both layers completely smoothed out. With both projects, I ended up with some slightly wonky pieces that I had to trim down a bit. Not ideal. So this time around, I sucked it up and re-traced the pattern pieces meant to be cut on the fold so that I could cut everything out in a single layer. The tracing was an extra step and meant a bit more pinning and cutting, but it’s one of those situations where doing what seems like extra work actually saves you a lot of time and energy in the long run. 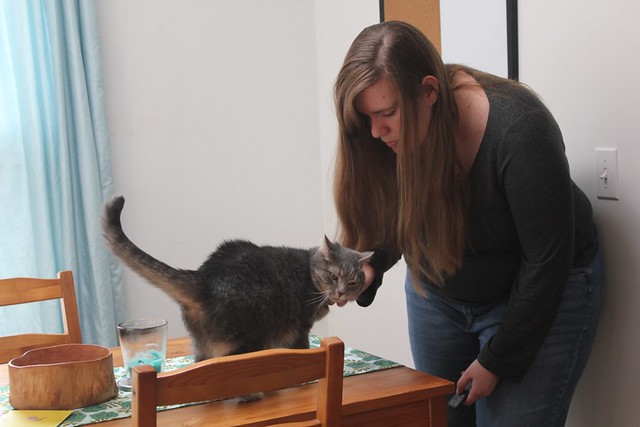 I’ve got a couple other pieces of jersey fabric that I’m planning to turn into t-shirts. I’m finding it hugely satisfying to sew my own basics, probably because I’m a no-frills person who really only wears basics. But also because I’m finding it increasingly difficult to find basic items in actual brick-and-mortar stores since what little plus-size shit was in stores seems to be rapidly disappearing. (I’m looking at you Target and JC Penny.) How quickly do you think I can manage to make my own jeans?