Today’s riveting topic: underwear! The six pairs of underwear you see below are the result of the past two weekend’s sewing efforts. Last weekend, I managed to cut out and construct several pairs and this weekend I spent my sewing time applying elastic like it was my job. I still have two more pairs constructed, but they’ll have to wait until I get some thread to match the blue elastic I’m planning to use.

I absolutely hate shopping for clothes as it is a series of never-ending frustrations at not being able to find clothes that fit me well, that match my style, and that are not made from the worst possible materials. This was my impetus to seriously take up garment sewing—there suddenly came a moment when it seemed easier to me to just make my clothes than to try to find things I liked in stores. While I had been toying with the idea of sewing my own clothes for awhile, it was trying to shop for underwear last year that proved frustrating enough to push me over the edge. There came a moment when I realized that, as a fat woman, my options for buying underwear in an actual brick-and-mortar store were 1) to get the super-thin kind that hit around your ribcage and only come in white or 2) to pay $5-$14 a pair from Lane Bryant, which at the time was featuring a line of underwear that all had spectacularly irritating things like “sassy” written on the butt.

By then, I had already been following the blog So, Zo… and had read her numerous posts about how easy it was to sew underwear, and I figured, it can’t be any fracking harder to make them than it is to try to buy ones that aren’t the very essence of terrible. So I dusted off my sewing machine, dug up a handful of old t-shirts, and dove in. There ultimately came a moment where my old, crappy machine couldn’t manage sewing through two layers of elastic and a layer of fabric, which put my underwear production on hold for a few months. But before that point, I repurposed a lot of t-shirts as I played around with the pattern, tried out some different construction methods, and experimented with elastic in different ways. With this most recent batch of underwear, I’ve finally adjusted the pattern and sewing procedure to yield exactly the fit and finish I want. And that makes this my first tried and true (or TNT) sewing pattern—an important milestone for a sewing noob! 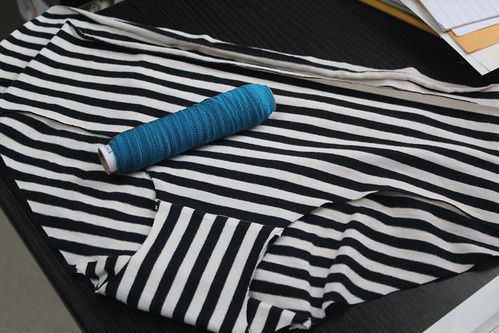 The pattern I’ve been using is Jalie 2568, which has options for either a bikini or hipster style with two different rises, as well as a pattern for stretch-lace boy shorts and a camisole. I picked this pattern primarily because it came in my size, but it also had really positive reviews. I’m really pleased with this pattern—it comes together quickly and it fits me perfectly right out of the envelope. It’s designed for fabrics with some Lycra content and says that your fabric should have 70% 4-way stretch, but I’ve almost always used fabric that has significantly less stretch—for any fabric with less than 50% stretch, I just cut out the next size up. Every pair shown here is the low-rise hipster style. I construct the underwear entirely on a regular sewing machine, using a narrow zig-zag stitch for the seams and a 3-step zig-zag stitch to attach the elastic. While I’ve made the pattern straight from the envelope, following the pattern instructions exactly, with good results, I have made two key changes to the way that I construct my underwear.

I’ve been using fold-over elastic (or FOE) to finish my underwear because I like the way that it looks, and I like the way that it encloses the raw edge. It’s also relatively inexpensive and easy to find. Most recently, I ordered a bunch of 5/8” FOE from an Etsy store called Elastic By the Yard. They sell elastic in a ton of different colors with lots of options for getting different yardage amounts–I got a couple of different 5 and 10 yard spools, which are really convenient, and the price ends up being under $.50/yard. A lot of sellers refer to FOE as “baby headband elastic,” which I find obnoxious, but obviously not so much as to prevent me from buying it. 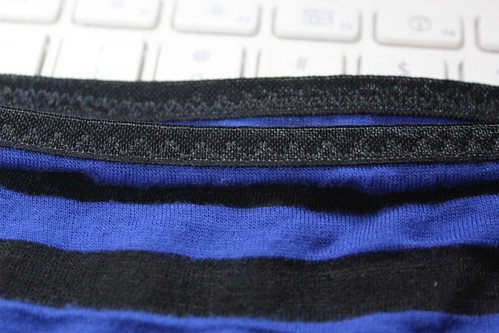 As is, the Jalie pattern recommends using 1” stretch lace around the waist of the underwear, which means that some of the finished height of the rise comes from the height of the elastic. Because FOE doesn’t add any height, I’ve lengthened the waist on my pattern pieces by about 3/4”. The pattern also recommends simply hemming the legs of the hipster style rather than attaching elastic. I did this with most of my early pairs and while it’s comfortable, I can attest that if you wear pants with any kind of stretch content, you will seriously benefit from having elastic around the legs to keep things . . . properly anchored. I use the same elastic at the legs that I use at the waist and apply it using a 2-step method similar to that described in this tutorial from A Very Purple Person. While I cut the waist elastic to be 10-15% smaller than the waist measurement of the pattern pieces, I only cut the elastic for the legs a bit smaller (somewhere between .5” and 1” smaller) than the leg opening. I will say that, once attached, the FOE feels stiffer than the elastic you’re probably used to seeing on RTW underwear, but it feels really comfortable while wearing.

2. Changing the pattern to have a separate, sandwiched gusset.

The Jalie pattern includes 3 pieces—a front, a back, and then a lining piece that you sew together with the bottom part of the front. This means that the (and I apologize in advance for having to use this terrible word) crotch is part of the front pattern piece. You can see the original pattern pieces for the front and the lining, which are both cut on the fold, in the photo below. This method works perfectly well, but it does leave one edge of the lining exposed and the longer front pattern piece makes it tricky to eke a pair of underwear out of a small piece of fabric. 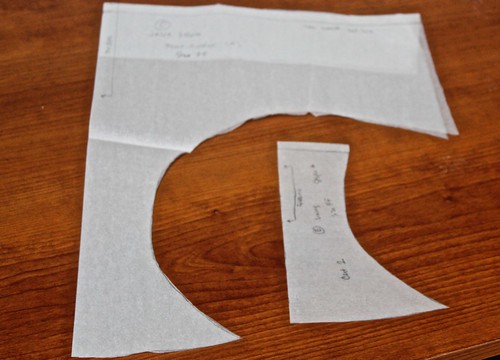 While reading underwear-sewing tutorials, I saw several people using patterns with an entirely separate crotch gusset piece that, when sewn together with the lining, completely encloses the front and back seams. I decided to alter the Jalie pattern to use this construction method—it was really simple and took about 60 seconds to complete. I simply laid the original lining piece over the bottom of the front piece and drew a line across the top of the lining piece—this line becomes the new seam line for the front piece. I then added a 1/4” seam allowance to the bottom of the new seam line on the front piece and the top of the former lining piece. 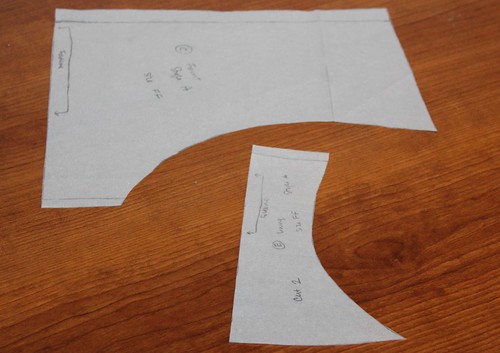 So there you have it—a really long post about making underwear. Underwear seems to be to sewists what dishcloths are to knitters—lots of people swear by their me-mades and lots of other people can’t imagine why you’d bother making something so basic that will see so much use and abuse. I’m firmly in the camp of swearing by my me-mades and have set myself a goal of replacing all of my RTW underwear by the end of the year. So onto the next pair!